Thank you so much for your loving comments, posts and emails a few weeks back when I shared about Mac’s health situation. My sincerest apologies for not replying until now, and even now replying via a large blog post. It might sound weird but responding to you all after I posted made the situation feel even a little more real and well, it had been feeling surreal which believe it or not feels better than real!

But alas, I did move into the land of reality that Tuesday, April 7th when my husband and I brought Mac to see the Hematologist. I knew where we were going – to the Children’s Hospital section of the local hospital. I had been there many a times before with Mac and my other boys – to see the Neurologist, the Rheumatologist, the Urologist and several other pediatric specialists. I assumed we would sit with Mac in the normal waiting room, watching the fish and staring up at the wicked cool painting on the ceiling. I assumed wrong. You see, our doctor is also a pediatric Oncologist so we were sent to the special waiting room – the one that is secluded and infinitely more sterile (as it should be.)

Reality hit – along with tears in my eyes and sweat in my palms – the minute I opened the door and saw two children who clearly were currently undergoing chemotherapy. My heart broke and fell into a thousand little pieces; and not just because of my fear for my son, but for my sadness and fear for these beautiful children who stood before us, laughing and smiling despite of their Cancer. Walking into a pediatric cancer waiting room was nothing short of a terrifying experience, but I will leave it at that as you do not have to feel what I did.  No one should.

We waited a whopping five minutes (an A+ to that doctor’s office for being on time) to see the doctor, although in truth, I had been waiting since the previous Thursday at about 3:15 when I made the appointment. Yep, I had been waiting days to meet the doctor and move on to the next part of this long and tiresome journey. Dr. H was quite nice and after listening to our story and reviewing the notes, he finally said,

“Well, I don’t think he has Leukemia.”

“Many parents come to see me and that is there assumption. But I assure you, I see no signs of Leukemia.”

He read my mind that I needed more proof and he went through all the data, showing me what was normal in the testing and what we would see if it were Leukemia. I of course felt relieved, but I’ll readily admit, I wasn’t entirely relieved because while I fear(ed?) Cancer, I never feared Leukemia. He went on to share his hypothesis of what was going on.

“I don’t see many red flags, and in fact, if it were not for Mac’s fevers, bruising and seizures, I would tell you not to worry one bit. But those factors do draw my attention. You have done a great job getting the proper testing done to date given the facts and I believe that Mac’s low white blood count is simply his norm – that when it looked normal, it was actually elevated. I do not think he has cyclic neutropenia. I think and hope that when he gets a fever again, that his numbers will go up. This will prove my theory and that we truly do not have to worry or do more elaborate testing; just a blood test if and when he is sick again.”

Not gonna lie, I know I should have felt truly relieved, like jump for joy relieved, but I wasn’t. I felt awful about myself that I didn’t feel more joyous (I had just gotten better news than many patients in that office) but the pit in my stomach just wasn’t satisfied. Fortunately, my husband made me feel better by admitting that he too felt relieved, but not. All we had was a theory and to boot, a theory that was ENTIRELY opposite of what another equally experienced Hematologist had said. Who should we trust? Could we truly stop worrying? Was it really okay? Or were we missing something? I just wanted a solid, completely and utterly 100% definitive answer as to what was going on with Mac.

And well, while I was close to being able to do all those things, I couldn’t; that was to say until last Wednesday when Mac spiked a wicked high temperature.

I knew the drill – the Hematologist had told us to immediately get blood work if Mac got sick again. The bad news is that Mac was really hit hard this time. As soon as he spiked (it happens out of no where it seems) he was lethargic and out. He couldn’t stay awake and even collapsed onto the floor of the hospital waiting room during registration. In fact, he was so out of it that during his blood work, he slept. The poor thing.

Awoken by my flash….Although sick, he looked so peaceful and snuggled up (and I record fevers on my phone with dated pictures.)

This kid is a champ – no tears when he gets his blood drawn, even on days when he is wide awake. Love him so much.

Not gonna lie – my heart was racing with major, major fear. I knew what this test meant: either the doctor was right and we could worry much less OR the doctor was wrong and we needed to worry more.

It was the moment of truth.

The good news is that we are fortunate enough to be able to get blood work done at the local hospital and that our Hematologist works there so we were able to immediately get in and get results within forty five minutes. As soon as the most incredible phlebotomist took Mac’s blood (she rocks and we love her and are so grateful for her skills…and lollipops!) we went over to our pediatrician’s for a check up (protocol with Mac’s high fevers.) Now, our pediatrician is also connected to the hospital and has access to the blood work. Without telling me that he was checking to see if it was ready (it had been a mere twenty minutes), he pulled up the results.

I wasn’t prepared for what he said…because I wasn’t expecting results so soon. I was totally caught off guard when he casually said to me,

“Well, his counts went up. Doctor H. was right. It doesn’t look like cyclic neutropenia and his immune/blood system is doing what it should. We can now focus on the other hypothesis of Periodic Fever Syndrome – which is a likely contender now.” 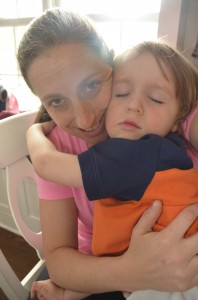 This is me last Thursday – just had to capture my happiness to share with my mommy and the sweetness that comes from a snuggle.

The tears were yet to come because I was in such shock that after months of bad test results we FINALLY got good ones. Finally. Did I mention, finally?! Finally a test result that didn’t increase our worries but brought them down.

Last Wednesday was a good day. A really good day.

And now the tears come.

It was a really, really good day and I just feel so fortunate to have the pediatrician we do and the hospital we do. They have made this journey just a wee bit less painful and I am so grateful.

I am also grateful because that day our pediatrician witnessed what I have been witnessing for the last eight months – that Mac feels on fire, literally, at 99. Not 100.4 as all say is that proper fever threshold, but 99. We talked about it and a new theory, a life changing one, developed. We are hoping (time and mommy charting his temperature dependent) that Mac runs cool so that 99 for him is actually 101 ish. If this is true, then not only do we know he is getting fevers more than we thought (tough news, but helpful news) but also that I can treat fevers sooner before they get out of control and cause seizures. This is huge folks, huge. Like, mega huge.

I am trying to hold onto this newfound hope…despite the last few days. 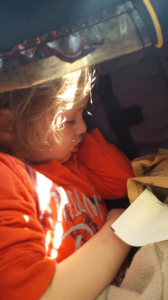 Mac’s fever was pretty fierce and lasted four days. And although it has broke, he isn’t back  to being himself. In fact, he has taken naps every day since last Wednesday, which isn’t his usual. Normally I would be ecstatic for the surprise naps (YEAH! Me time!) but they are alarming to me especially because he is falling asleep early in the day and staying asleep despite being completely uncomfortable. My husband and I have decided to wait until Friday to push for more blood work. I am hoping that tomorrow brings no naps; now who the heck would have ever thought a parent would wish that?! Ha!

I will continue to keep you posted and I am so hoping that my newfound hope will help me find my way back here, a place that I so miss being a part of on a more regular basis.

Much gratitude to you all for being here, for staying here, and for supporting us,

The Orange Rhino,
a.k.a. Mac’s (and James, Edward’s and Andrew’s) mom
a.k.a. Sheila
a.k.a. The Mom who still can’t believe she is hoping for no surprise naps tomorrow! 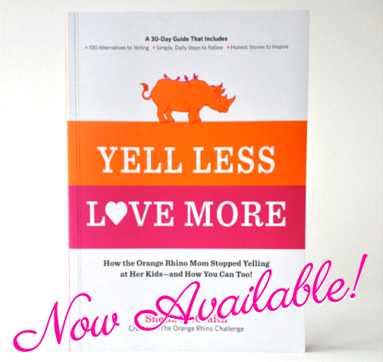 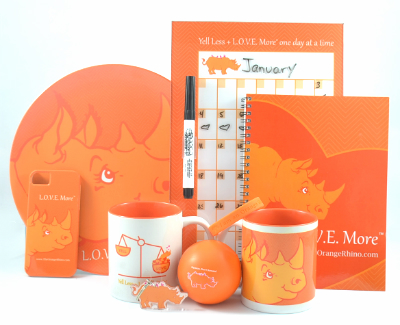 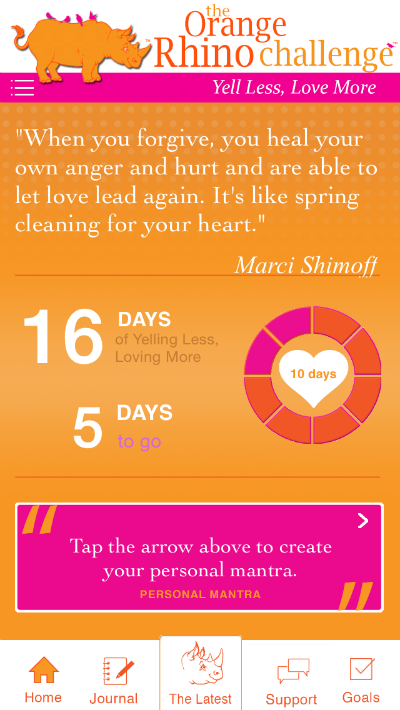 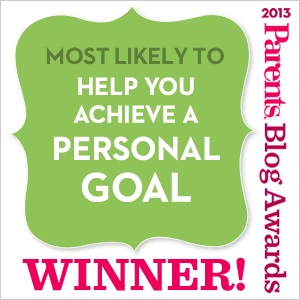